Shipping not included please ask for a shipping quote. Picking up is available at Nuvintage warehouse by appointment.

Jan Henderikse (Delft, 1937) began his career as an informal painter. In 1960 he co-founded the Dutch Zero group and began experimenting with assemblages and the impact of large numbers of common objects such as corks, produce crates, crates of beer, licence plates and money. In the mid-1970s he became involved in film-making, the publishing of limited editions, photo sequences and installations of found and rejected photographs.

Henderikse shamesly uses whatever materials come his way. The originality of his work lies in its method: serial composition and his presentation of slices of reality without further comment. Searching for his materials amongst cast-off and the coincidental, he long preferred the relics of ‘small’ human needs. In his more recent works, however, he has occupied himself more with the threatening aspects of major world events. 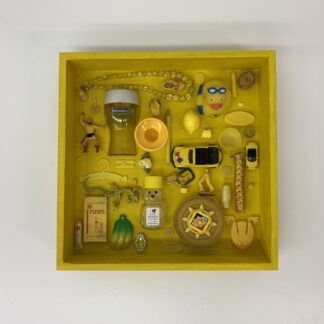 Shipping not included please ask for a shipping quote. Picking up is available at Nuvintage warehouse by appointment.
Add to basket